From soul to brush to canvas, McRay’s art overflows with bright colors, expressive styles, and energized designs, which he employs to capture the vibrancy and intensity of his subjects. He is on the road to reinvention; constantly challenging himself, and exploring his visual language.

McRay received a BFA degree at the Maryland Institute, College of Art, where he earned a four-year scholarship for his artistic talent. A native of Washington, DC, McRay moved to North Carolina and has been exhibiting since 1987. In November 1998, he was juried into Raleigh’s prestigious Artspace. McRay’s artistic career has been featured on TV and radio programs, and in numerous newspapers, magazines and websites. The Raleigh News & Observer named him one of the “Artists to Watch”. Numerous times he has been listed among the “Best Local Artist” and “Favorite Local Artist”. McRay has received feature articles in Fortune Small Business, Art Business News, Our State Magazine and Southern Living Magazine.

"Over my lengthy art career I have had the honor and privilege of warming homes and offices with my work. I appreciate every collector I have ever met. The greatest compliment you can give an artist is to collect their art." - McRay 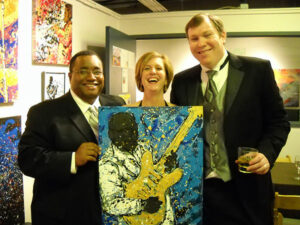 Learn More
Are you looking to take your own art to the next level?
Brush up on your skills or expand your artistic practice with workshops or individual lessons from McRay. Gain insight and techniques from an artist with years of creative experience in multiple mediums.